This is the book that started the Ancient Astronauts theory in the 1970’s. If you have never read any book on the subject, I highly recommend that you start with the father of all, this one. It is also illustrated with tons of pictures that show real strange stuff!

Have you ever wondered if an alien species could have intervened in mankind’s past? If you think it is a ridiculous idea, think again. Erich Von Daniken dissects Earth’s mysterious past by trying to understand many unexplained monuments and facts and their incomprehensible meaning in the light of our time. How were the Pyramids built or the statues of Easter Island? How were the maps of Piri Reis ever thought off to show the Earth just like modern astronauts see it from space, centuries before Galileo. The Pyramids, claims the author, could never have been built the way conventional archeologists would like us to believe. It would have taken workers several generations. A lot of ancient texts from varied cultures tell us about ancient Gods (or « Giants ») in flying machines. And there is plenty more.

Erich Von Daniken has wrote a classic that is still absolutely relevant today as formal archeology has not shed more light on the various mysteries of our shared history. Tremendously good and engaging. 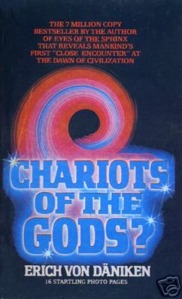