The history of the Environmental movement in the US has undergone many phases over the years. It started in the late 19th century with a few concerned citizens witnessing the disappearing frontier and forests of the country in what used to be considered unspoiled when only Native Americans were inhabiting North America. The author shows the destructive policies and philosophies accompanying the arrival of the Europeans from the days of the Mayflower and tells the story of the fights in the name of nature undergone until now (Clinton Administration at the time of the book).

This story is also a fascinating account of the changes occurring more and more in people’s minds. However, the author shows that there is an enormous work still to be done. Also at the time of the book, Philip Shabecoff wasn’t talking about the damages done by the current administration and its criminal environmental record. He has published a revised edition that I would like to get my hands on. In the light of these past 8 years of environmental abuses, there is certainly a lot to tell.

The author also speaks about the various environmental groups and their grassroots counterparts who have been fighting for so long to wake up the public and change laws not just here in the US but around the world. I am grateful to him for acknowledging the many contributions of these groups over the years and their impact on changing things.

The picture below is the revised edition. 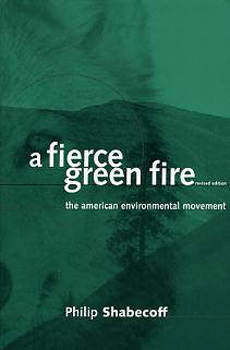