I am sick and tired of people being ignorant when it comes to Wicca or Witchcraft and not knowing well how to explain to them than it is not satanistic is always a challenge. So I decided to pick up this book and learn more about the craft, its origins and its rituals. My cultural background (Celtic) predisposed me to know about it somehow but I never involved myself too much into it and also, like most people, I was mostly intrigued by the spell side of the stuff. Or I had just watched too many episodes of « Charmed ». Anyway, let me state it clearly. WE ARE NOT TALKING HUMAN SACRIFICES HERE!!! I don’t want to hear this anymore.

Arin Murphy-Hiscock is a practicing Wiccan with a long experience of spell-casting, circle raising and rituals. She gives also a very detailed account of all the holidays pertaining to the practice. And NO, Halloween is not called Halloween but we’re talking about Samhain, the third and final harvest festival in the Wheel of the Year. Enough of the stupid analogy to Halloween. Here’s what a true practicing Wicca says about the meaning of Samhain: « This final sabbat is also the beginning, as all ends hold within them the promise of a new birth. The ancient Celts recognized only two basic seasons – summer and winter. Just as summer begins with Beltaine, so does Samhain signal the beginning of the winter season. Samhain marks the time of quite and reflection that will occupy our minds and hearts until Yule, or Midwinter, when the God will once again be reborn. … Samhain is also the celebration of ancestral death as an essential element within the cycle of life. » T’is FRIGHTENING! isn’t it? Also, read this: « As in other sabbats, the spiritual celebration has been secularized, and the holiday of Halloween BEARS LITTLE RESEMBLANCE to the spiritual themes associated with Samhain. » No, she said and I wanted to point that out strongly to those who keep insisting that Halloween is the holiday of witches!.

Let’s move on. Besides discussing the wiccan holidays, Arin Murphy-Hiscock explores the rituals associated with the changing seasons of life. Note that wiccans, like buddhist or Hindus, believe in REINCARNATION. Yes, it’s true. There is a lot of explanation regarding the Crafting Liturgy, Advanced Circle casting, Rituals of all kinds (none of them are meant to hurt anyone) and what to do if you don’t belong to a coven.

This book is a must for any person practicing the craft on his/her own. I don’t recommend it for somebody who doesn’t know anything about it and still thinks witches are wearing pointed hats. But anyone interested in knowing the REAL Wicca religion (and it IS a religion as much as any other organized ones) will find this book a very interesting read. 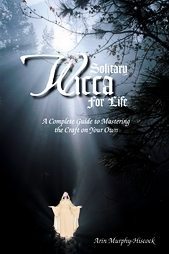